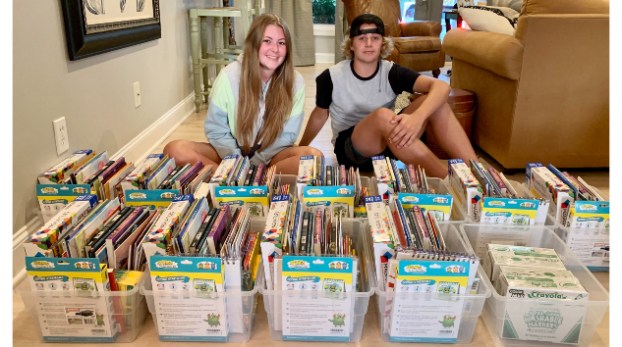 Addie (left) and J.T. Barbee show contributions from Bondo Innovations in Locust to their Caring From the Courts drive this year. The group is still looking for more donations through August. (Contributed)

As schools go back to more normal operations, two Stanly students plan to continue to help others with a program started last year.

Addie and J. T. Barbee for the second year are doing “Caring From the Court.” It’s a drive for children’s books to give to students with special needs.

Addie, who graduated from West in 2020, was a co-captain of the Colts’ volleyball team while also playing varsity basketball and volleyball for four years. She also played two years of varsity soccer and track. She now attends N.C. State University.

Her brother, J. T., will be a junior this year at West and plays basketball, tennis and golf for the Colts.

The two are collecting books and school supplies for students whom the group said is “underrepresented in our classrooms and school libraries.”

Students with special needs, such as autism, Down Syndrome, pediatric cancer, anxiety, stress and more, can get a plastic bin full of books and school supplies.

The group is coordinating its efforts with Lynn Plummer, director of elementary education for Stanly County Schools, to distribute books and materials to each of Stanly’s 11 elementary schools.

Caring from the Court was created “to not only shine a light on those students who aren’t always acknowledged, but also to educate and enlighten others,” according to the Barbees.

The group has a wishlist on Amazon linked to its Facebook page and is still taking supplies in through Aug. 13.

A new subdivision which is close to being completed got final approval from the Richfield Town Council. At Monday’s meeting,... read more