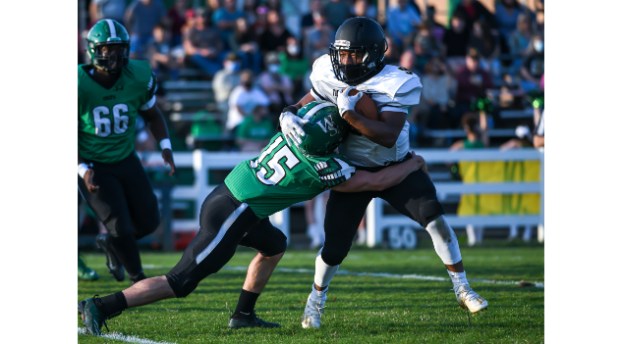 Defense was again the word of the day for the West Stanly football team.

The Colts took the lead on the opening drive of the game and never trailed Friday night, shutting out Montgomery Central 24-0 on Homecoming Night.

West (3-0, 3-0 RRC) allowed 64 net yards total in the win over the Timberwolves (1-3, 0-2 RRC) and posted three shutouts in as many games to start the season, a feat never accomplished before by a Colts’ team.

The closest Montgomery Central got to the end zone was on the ensuing drive, gaining three first downs but stalling on the West 24-yard line.

“Our defense is carrying the load for sure,” West head coach Brett Morton said. “My hat’s off to those guys…they have answered the call for three weeks in a row.”

“One of the things we focus on is everybody getting to the ball so we will have (the ball carrier) held up,” Efird said.

The senior also credited Jax Hall and Braden Pope for stepping up in the game after starter Carter Miller went out with an injury. Efird also said Nick Barringer and the West defensive line have played well all season, including in Friday’s win.

Colt junior Gavin Hudson, along with his defensive efforts, provided the offense for West as well. From his fullback position, Hudson scored three rushing touchdowns in the game. Hudson and Logan Little finished with 55 net yards each. As a team, West rushed for 173 net yards on 37 carries.

Hudson had not played running back until last season when he took over for Jordan Poole after he suffered a shoulder injury.

“I didn’t start playing fullback…but with Poole’s injury, it just kind of took off from there. I’m more of a power guy, running up the middle between the tackles, but I love it,” Hudson said.

Controlling the line of scrimmage and tempo of the game is important, the West junior added.

“Our defense doesn’t have to be out there as long and we’re fully energized on defense,” Hudson said.

Hudson finished an 11-play, 62 yard scoring drive to open the game, taking 5:33 off the clock, with a five-yard scoring run. He later added touchdown runs of one and 10 yards.

Senior quarterback Jordan Manshack had a strong night, completing 7-of-12 passes for 99 yards to four receivers. Austin Stoker had four catches for 76 yards.

West also got a 27-yard field goal from Jaime Jaramillo to end the first half by putting the Colts up 10-0.

After Riley Barbee was named homecoming queen, the Colts retook the field and continued to shut down the Timberwolves.

The win for the Colts keeps the team tied with Mount Pleasant for first place in the standings. The two teams play in the last week of the season, April 9.

West Stanly was scheduled to play Anson Thursday night but the game has been cancelled. An official statement on the cause of cancellation was not available over the weekend. However, the official West Stanly Football Twitter page posted Sunday trying to find an opponent this week. (Sports Editor’s Note: The previous paragraph was edited Sunday evening after the information was posted on Twitter and was late for the print edition.)

Sports Editor’s Note: The following story was written by David Shaw for the Salisbury Post. With a chance to slide... read more