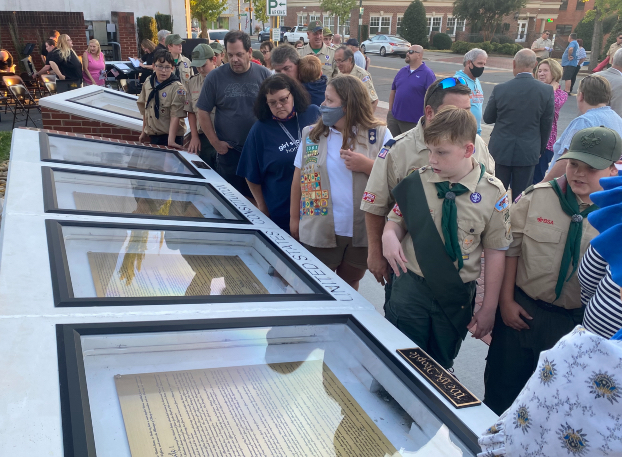 Several members of the public, including a few Boy Scouts, take time to examine the replica of the U.S. Constitution.

Stanly community comes out for Charters of Freedom dedication ceremony

After more than two years of collaboration and construction, part of which had been delayed by the COVID-19 pandemic, people throughout the community gathered Tuesday outside Albemarle City Hall for the official dedication of the life-size replicas of the U.S. Constitution, Declaration of Independence and the Bill of Rights, collectively known as the Charters of Freedom.

The documents, which each weigh more than 60 pounds, are engraved on quarter-inch thick bronze tablets in shatter-proof glass across from the Stanly County History Museum. They were built thanks to Foundation Forward, Inc., a North Carolina-based educational nonprofit. 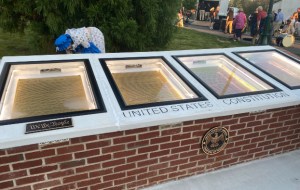 Life-size replica of the U.S. Constitution.

The display is composed of the same brick facade as the city hall. The documents are enclosed in a permanent setting that is built to last up to 500 years.

About 20 legacy pavers have also been installed in front of the Charters of Freedom for citizens to honor loved ones, active duty military or veterans, first responders, businesses or organizations. Prices for the pavers range from $100 to $350 and can be purchased at chartersoffreedom.com.

The ceremony, which began at 5 p.m. with music from the Stanly County Concert Band, including “Fanfare for the Common Man,” lasted about an hour and half and featured highlights such as a flyover, a presentation of colors by the West Stanly High School JROTC and a seven cannon salute, representing the seven articles of the U.S Constitution. Albemarle City Council members, Stanly County Schools Superintendent Dr. Jarrod Dennis, N.C. Rep. Wayne Sasser and N.C. Sen. Carl Ford were among those in attendance.

Bricklaying students and alums from West Stanly High School, along with their instructors, helped to build part of the encasements for the documents. An engraved bronze plaque will soon be on the side of the Declaration of the Independence, featuring the names of all the students who helped.

The dedication ceremony was the culmination of months of work by a steering committee chaired by Albemarle Mayor-Pro Tem Martha Sue Hall.

“Foundation Forward brings the setting to our county but it’s our community support that’s needed to keep this program moving forward and available to other communities,” Mayor Ronnie Michael, a steering committee member, said.

Dennis, also a committee member, touched on the importance that these documents will mean to the school system going forward.

“Our students will benefit by being able to come here and incorporate this into the curriculum,” he said, “because short of going to Washington, D.C., I don’t think you’re going to find a better representation of the Charters.”

Foundation Forward was founded by Vance and Mary Jo Patterson, who were inspired to bring the founding documents to people around the country after first seeing them in person at the National Archives in Washington, D.C. in 2011. The first Charters of Freedom setting was completed in Morganton three years later.

Though erecting the settings in different communities is expensive, Vance Patterson told the crowd that it’s worth it.

“We believe it gives us a direct link to our founding fathers by helping to preserve what it is they gave this country — a government to serve and protect,” he said.

The organization’s hope, Patterson said, is that future leaders will come from communities with their own Charters of Freedom and that their children will grow up “no longer just talking about the Constitution and Bill of Rights in Washington, they’ll be talking about their Constitution and their Bill of Rights, the ones they grew up with, right here in Stanly County.”

Patterson emphasized that the Charters is not a monument or a memorial dedicated to the past; rather, it is an “active, hands-on educational supplement,” that children now and in the future can access to learn more about the founding of the country.

Before he finished his speech, Patterson issued a challenge to everyone in attendance. He told them to bring their family members and friends to the setting and talk to them about their freedoms and rights “and how those freedoms and rights give them an advantage over the rest of the world to pursue their passions, to chase their dreams, to accomplish their goals, and get out of life what they want to get out of life.”

Once the setting was unveiled and the ceremony concluded, throngs of people approached the setting to examine each of the founding documents. 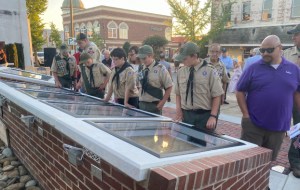 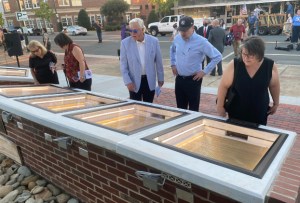 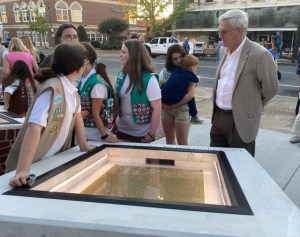 In addition to the Charters, the site will also feature a time capsule containing letters from citizens, memorabilia from local groups and a signed list of everyone in attendance at the dedication. A smaller ceremony for the burying of the capsule will be conducted in the coming months.

The capsules — both in Albemarle and the others across the county — will all be opened on Sept. 17, 2087, which will mark the 300th anniversary of the signing of the U.S. Constitution in Philadelphia.

Lisk chosen to replace Chance on school board