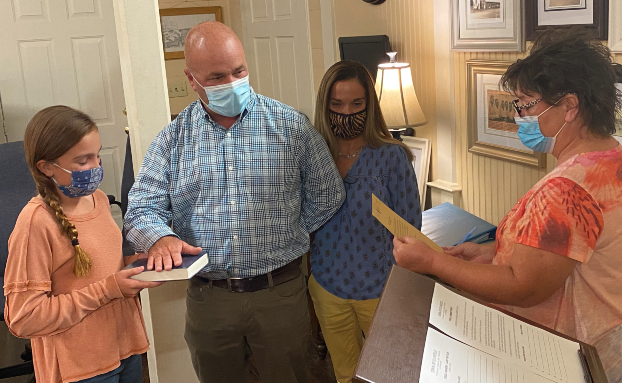 Greg Bratton was sworn in as Stanfield's newest commissioner Thursday night alongside his daughter Ava and wife April.

Stanfield gains a new commissioner; board approves changes to Land Use Plan

The Stanfield Board of Commissioners gained a new member as long-time resident Greg Bratton was sworn in during Thursday night’s meeting, with his wife and one of his daughters by his side.

Bratton, who is an inspector for Dicon Consulting, had been approached by members of the board a few months ago to fill the vacancy left by Larry Sides, who resigned for personal reasons earlier this year.

Bratton, 47, agreed to become a commissioner because he wanted to make a difference in his hometown.

“I’m looking forward to help make the right decision for the town and hopefully keep it a small-town feel,” he said.

Bratton will be responsible for reporting on streets and parks and recreation issues each month.

He was the right person to fill the vacancy because “he’s a lifelong member of our community so he’s invested in our town and he has small children that are also very interested in our parks and schools,” said Mayor Pro-tem James Kluttz, adding Bratton has always been a valued and respected member of the community.

With the Board now at full strength with five commissioners for the first time since the beginning of the year, Kluttz said more can now be accomplished to help support the town.

“Now that we’re fully staffed and we have commissioners responsible for all our different areas, we have a tremendous amount of work we want to do with our parks and recs and having Mr. Bratton on board now I think will help us start moving some of that forward at a more rapid pace,” Kluttz said.

Once Bratton was sworn in, the commissioners approved seven of the eight changes or modifications to the town’s Land Use Plan.

The plan, which was submitted by the Land Use Committee and the Planning and Zoning Board after about five years of engaging with the community, calls for eight changes from the current land use plan, which was adopted in 2007.

The commissioners approved the following changes:

The next scheduled town council meeting is 7 p.m. Nov. 4.

Bishop Richardson, leader and spiritual voice in the community, dies

Bishop James Richardson, former pastor of Saints Delight Church in Albemarle and a steady and reliable presence in the community... read more