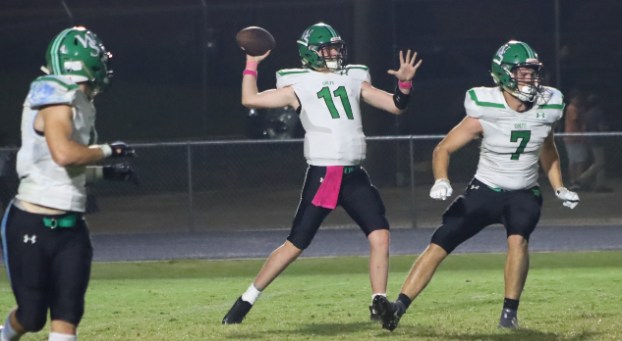 In high school football games Friday night, North took on a team for the first time while two previous conference foes squared off in Union County.

Two teams who have never played each other took the field at R.N. Jeffery Stadium Friday night when the Comets hosted the Robinson Bulldogs.

North led early, but the Bulldogs scored 21 unanswered points in a 21-7 win.

Comets quarterback Luke Shaver put the hosts on the board first with an 13-yard touchdown run, a bootleg to the left side of the line, with 4:53 left in the first quarter. Mac Barfield’s point after put the Comets up, 7-0.

Late in the first half, the Comets found themselves backed up to their own goal line. North fumbled into the end zone where Robinson (6-1, 1-0) recovered the ball for a touchdown and a 7-7 tie with 3:34 on the clock.

The Bulldogs took the lead for good with 3:13 left in the third quarter. Quarterback Blue Monroe picked a bad snap off the ground and busted through the middle of the line for a 22-yard touchdown run. The extra point put the Bulldogs up, 14-7.

Monroe added another rushing touchdown for Robinson after the Comets fumbled at the North 4-yard line with just under four minutes left in the fourth quarter.

The last time Parkwood and West Stanly met on the football field, Parkwood had a different mascot.

Now known as the Wolfpack, Parkwood jumped out to an early lead and never trailed in a 21-7 home RRC win over the Colts.

Junior Matthew Parker took a pitch to the left, broke some tackles and went 50 yards for a touchdown. The extra point by Jaime Jaramillo’s brought the Colts within one point, 8-7.

The Wolfpack extended its lead in the opening quarter with a 45-yard touchdown run from Wisdom Holmes, 14-7.

Parkwood added a late touchdown with 1:19 in the first half, a 51-yard touchdown reception by Jordan Barnes. The two-point conversion failed, and the scored stayed 21-7 into halftime.

The game was physical, with both teams having a player either carted off the field or taken by ambulance.

West Stanly will stay on the road this Friday night traveling to Forest Hills (4-2, 1-0 RRC). The Jackets shut out Anson County Friday, 52-0.

Albemarle, South Stanly face off with 1A playoff bid on the line