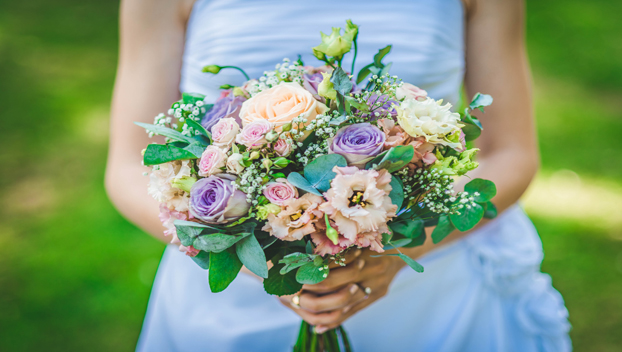 Given in marriage by her father and stepfather, the bride wore an ivory “Lover’s Society” gown adorned with crepe, lace and an ivory lining. Her gown included a fitted halter neckline with an elongated cutout in the bodice and a long figure hugging skirt. She wore a tulle cathedral length veil. The bride carried a bouquet of greenery and assorted garden flowers.

The bride is a graduate of Albemarle High School and attended Central Piedmont Community College in Charlotte, NC. She is employed by Southview Dentistry in Charlotte, as a dental hygienist.

The bridegroom is a graduate of South Stanly High School and Clemson University. He is employed by Novolex in Charlotte, as a Senior Business Analyst.

Following the ceremony, a reception was hosted by the parents of the bride, John and Mandy Scardina, at Cadillac Service Garage in Greensboro.

On Friday, prior to the wedding, a bridal luncheon was hosted by Linda Hall and Phyllis Scardina, grandmothers of the bride, at Gia Restaurant in Greensboro.

A rehearsal party was hosted by Roger and Dale Ford, parents of the groom, at Sedgefield Country Club in Greensboro, on the eve of the wedding.

Following a honeymoon to California, Connor and Victoria are making their home at 8520 Loxton Circle, Charlotte.

SNAP Back In Time takes a look back at newsmakers from yesteryear.  Tuesday, Sept. 27, 1966 Quenby Mall Six stores... read more