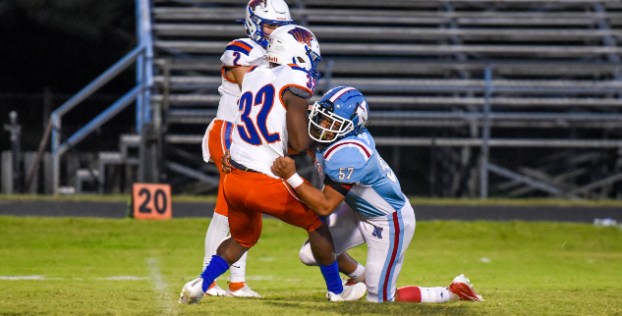 However, a fortunate bounce off a foot in the last seconds gave the Tigers a 31-28 win.

Trailing by four with 9.8 seconds left, Randleman QB Christian Long threw a pass into the end zone. Two Comet defenders and one Tiger receiver met at the same time the ball reached the end zone. As the players fell to the ground, the ball deflected off a Randleman foot and went into the air.

The back-and-forth contest started with the visitors going up early. Thomas Tobias put the Tigers up in the first quarter with an 8-yard touchdown run.

North’s rally started two minutes into the second half when Shaver found B.A. Harris in the middle of the field open with a pass. Harris raced to the end zone for a 74-yard touchdown, pulling the Comets within three, 17-14.

Later in the third, Karee Dykes took a pitch from six yards out and scored around the left side of the line to put the Comets ahead 21-17.

The lead changed hands three times in the final four minutes of the game, with Randleman pulling back ahead. A short touchdown run with 2:30 left put the Tigers ahead 24-21.

But North had time for one more scoring drive. Starting at the Comet 23-yard line, a pass interference call on third down and 10 kept North’s drive alive. B.A. Harris ran a reverse which gained 22 yards. Two plays later, Shaver stepped up in the pocket and found Stefan Harris with a pass to the home sidelines. Harris avoided two Randleman tacklers and curled into the end zone with 37.4 seconds left, putting North back on top 28-24.

However, a late flag on the touchdown for unsportsmanlike conduct backed the Comets up on the ensuing kickoff 15 yards. Randleman took over at the North 47-yard line with under 30 seconds to play. Randleman’s Long completed a pass down to the Comets’ 31-yard line as his receiver got out of bounds with 18.6 seconds to play. Long then completed another pass down to the North 19, which set up the game-winning touchdown.

North has a bye week this Friday and returns to the field Oct. 1 with a road game at Union Academy to open Yadkin Valley Conference play.

The West Stanly varsity football team got back to the team’s non-conference schedule Friday facing a top rated 3A school... read more