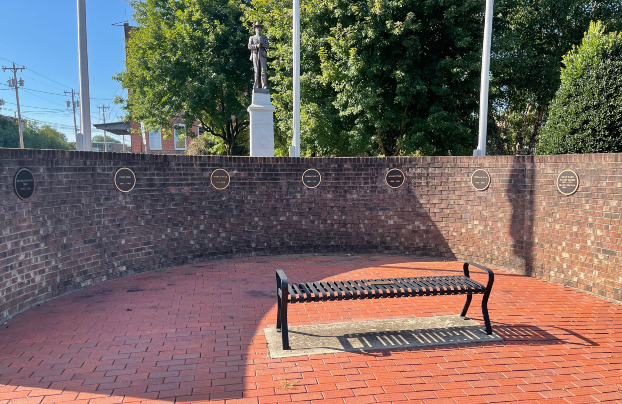 Liberty Gardens in downtown Albemarle was created as a way to honor the military, police and fire and EMS personnel — especially those who helped during 9/11.

Albemarle park was created after 9/11 to honor, remember those who have served

As the United States remembers the 20th anniversary of the Sept. 11 attacks, many people have taken time to reflect on the many sacrifices made by first responders and military personnel over the past two decades.

One of the best places to go to honor America’s heroes is Liberty Gardens in downtown Albemarle. Originally created as a 9/11 memorial, the park actually has a direct link connecting it to the day: A piece of the wreckage from the Pentagon is on display along the right-side pathway.

“I hope that people understand and realize that the three entities that are recognized there — the military, fire and rescue and law enforcement — are the three entities that have sustained this nation,” said Vicki Coggins, former Albemarle Downtown Development Corporation director who helped to spearhead the creation of the memorial.

Mayor Ronnie Michael said the park has been used for an assortment of purposes since its inception including military and first responder events along with weddings and patriotic rallies.

The origin story of the park began a few months after the attacks. As an accredited member of the Main Street America Program, participating Main Street directors received an email from the operating body, the National Trust for Historic Preservation, asking communities to do something to remember 9/11, Coggins said.

“It could be as simple as planting a tree or creating a park or putting a plaque on a bench,” Coggins said. “They just asked that there be some remembrance given to the event on 9/11.”

After bringing the task before the ADDC’s design committee, the decision was made to create a memorial park in downtown Albemarle honoring military and first responders that would be known as Liberty Gardens. They agreed upon the site, located at West Main and Depot streets, which at the time was vacant except for an old building not being used along with tree stumps and rocks.

A Liberty Gardens steering committee was also formed, Coggins said, with Wayne Palmer chosen as chairman. Other members included Michael, who was co-chairman of the committee, and Aaron Deese, who at the time was director of emergency services.

Palmer put together a fundraising committee to raise money for the project. Around that time, the decision was made to specifically have the park serve as a symbol honoring the bravery and sacrifice of three groups: the military, police and fire and EMS personnel. People throughout the community were encouraged to purchase engraved brick pavers, benches and lamp posts, in honor or memory of certain groups or individuals.

Coggins does not know how much money was specifically raised for the park but says that people have continued to purchase engraved bricks to honor loved ones who have served. There are four sections for bricks available for people who would like to honor loved ones: Veterans, police, fire/EMS and the general public.

On Nov. 11, 2004, a few years after the idea for the park was first conceived, Liberty Gardens had its dedication ceremony. Several people spoke, including Palmer, who talked about the history of how the park came to be, and Michael, who recognized the key contributors to the project. They included, among others, the city of Albemarle, Bank of Stanly, Uwharrie Capital Corp., First Citizens Bank, Home Savings Bank and the Stanly County Community Foundation.

Each facet of the park honored different groups and individuals, according to the dedication program. For example, the flagpoles were in honor of all firefighters and Stanly County veterans while the benches honored disabled American veterans and the Fraternal Order of Police Ladies Auxiliary.

There’s also a semicircular wall with memorial plaques honoring soldiers from every war in the country’s history ranging from the Revolutionary War all the way to Iraqi Freedom.

Gen. Gerald “Rudy” Rudisill (Ret.), who was stationed at the Pentagon when the attacks occurred, was able to acquire and bring back to Albemarle a shard from the Pentagon exterior wall that had been damaged. 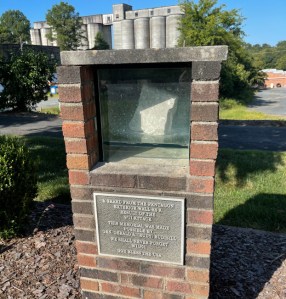 An exterior shard from the part of the Pentagon that was damaged is housed at Liberty Garden.

Coggins said the initial plan was to try and secure a piece of wreckage from one of the two World Trade Center towers in New York, but once that didn’t go through, Rudisill, who is from Stanly County, was able to get the piece from the Pentagon. It forever ties the memorial park to the events that occurred 20 years ago.

“Let us not forget what happened that day and the people that gave so selflessly of themselves,” Coggins said.

The Red Cross Town Council will not meet in September. According to an email from Aloma Whitley, town administrator, the... read more