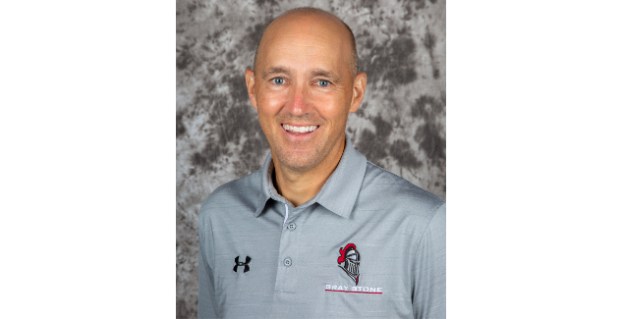 For the first time in the school’s history, Gray Stone Day has a new athletic director.

Scott Wolfe, a teacher and coach with 27 years of experience, takes over for the school’s original athletic director, Jeff Morris.

“We were headed for a bit of administrative transition here,” Wolfe said, adding he was excited about the opportunity to lead the Knights’ athletic program.

Wolfe said many of the school’s administrators like Morris were taking care of athletics while also performing day-to-day operations of the school. He added because of Gray Stone’s growth, doing both jobs “was getting to be a big overload.”

Wolfe, along with teaching two physical education classes, will be the school’s athletic director full-time. He said he had been transitioning into the role since the recent spring athletic season.

Having grown up in southeastern Ohio, Wolfe taught for six years before meeting his wife. The two then moved to Cabarrus County, where Wolfe taught at both Central Cabarrus and Hickory Ridge high schools.

The move to Gray Stone, he said, was the chance to teach at a much smaller school.

Wolfe has coached the women’s soccer team at the school for four seasons, amassing a 43-13-3 mark with a 75.42 winning percentage in that time, winning the Yadkin Valley Conference title three times. Included in his time as the coach was a 40-0 conference record for the players who graduated this past June.

The new Gray Stone AD credits many teachers and coaches having been his mentors throughout his career. Wolfe said he learned much from Morris and former Gray Stone assistant AD Robert Stack. He said the two taught him about “the Gray Stone culture…the way we want to do things here.”

Calling Morris and Stack “a class act all the way,” Wolfe noted the number of sportsmanship awards the school has won along with success on the fields and courts.

“A lot of (the success) has been a byproduct of having driven kids, good leaders,” Wolfe said.

He said Gray Stone coaches have been “pushing and developing that side” of the student-athletes in terms of leadership.

“I’m not trying to fill their shoes because I’m not sure anybody can…I think in terms of following their footsteps.”

He likened a school’s athletic program to being “the front porch of your school.” He added people “may not know anything about what’s happening in the hallways of that school. Every school, there are great things happening.”

The new AD said when a person looks at a house and does not like what they see on the front porch, “that’s kind of how you feel about the entire house.”

Wolfe said Gray Stone athletics has “a great tradition (and) and a great foundation…we’ve got a good thing. Let’s keep that going.”

He said the expectation level for Gray Stone is high “whether it is academics or athletics.”

She was the Yadkin Valley Conference’s volleyball Player of the Year, where she and her teammates did not get to... read more