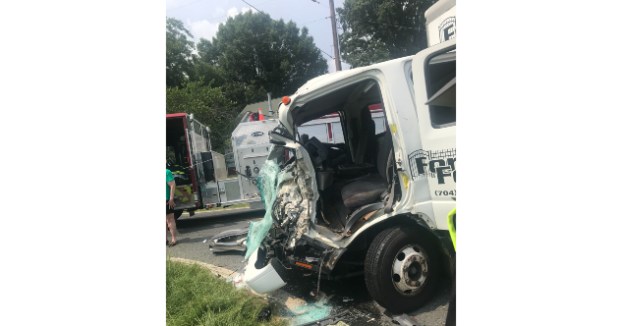 One driver had to be hospitalized in a two-vehicle traffic incident Monday on Millingport Road.

The driver of a Forrest Fence truck driving South on Millingport Road collided with a Southeastern tractor trailer driving west on Rogers Road at 3:08 p.m.

According to North Carolina Highway Patrol Trooper Whit Efird, the Southeastern driver looked both ways, did not see anything and started through the intersection of the two roads. The Forrest truck hit the back end of the trailer in an angled collision.

The fence truck driver had minor injuries despite his legs being pinned in the truck cab with significant front-end damage. Initially, a helicopter was called but cancelled when officials decided he could be transported to Atrium Northeast.

Speed was not a factor, Efird said, with the tractor trailer going approximately 20-25 miles per hour and the Forrest truck going 50 in a 55 mph zone.

Efird said the Southeastern driver had no injuries but did receive one moving violation charge of unsafe movement.

Along with the State Highway Patrol and EMS, Millingport Fire Department and the Stanly County Sheriff’s Office assisted.

A new subdivision which is close to being completed got final approval from the Richfield Town Council. At Monday’s meeting,... read more