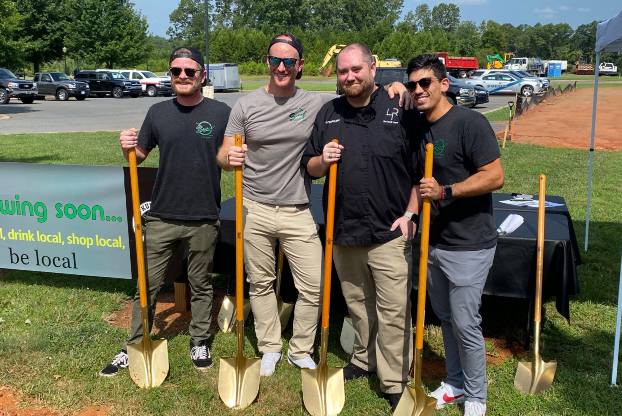 The Local Room owners to open brewery in Locust

For fans of The Local Room restaurant in Locust, there’s good news on the horizon.

The owners are planning to open a sister business on property right across from Locust City Hall. It will be a brewery called The Brew Room.

The brewery, which will be about 4,600 square feet, is designed to offer an “inviting, casual and comfortable place of gathering,” said co-owner and Stanfield resident Matthew Harris during the groundbreaking ceremony Tuesday morning.

The Brew Room will feature 20 beers on tap, including five year-round beers, an IPA, session pale, brown ale, blonde ale and two rotating seasonal beers, along with wine offered by the glass and bottle. There will also be a full service kitchen offering traditional bar food or, as they call it, “chef-inspired pub grub.”

Aside from Harris, the other three owners are Pfeiffer graduate Jimmy Molina, Matthew Klepp, who will also operate the kitchen, and Christopher Kunkel, who will also be the brew master. Harris, Molina and Klepp are part of TLR Holdings LLC, which bought the property that is now the Local Room in 2018 and which is developing The Brew Room.

They have invested about $1.2 million into the business, which will create about 25 new jobs, Harris said.

They have designed the brewery to encompass an open-air feel similar to The Local Room, with a “modern meets small town” feeling, according to an information packet distributed to people at the groundbreaking event. The building will feature large glass overhead doors which will open the taproom up to the patio. The interior will consist of stained concrete floors, live edge barters and tables and soft lighting.

The idea is for the brewery to be a place where all people will feel welcome, even if they have young kids, Harris said.

“We offer a setting that will allow you to relax, unwind and socialize,” Harris said.

Plans for the new business have already been submitted to county officials. Construction is slated to begin in the fall and, while things are fluid and could change, Harris is aiming to open The Brew Room next March or April. 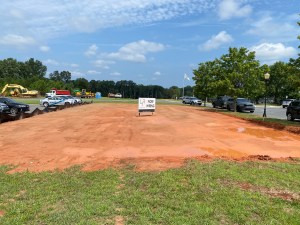 The Brew Room will be built on property right next to Locust City Hall.

Harris said the inspiration for the new business came from Locust City Administrator Cesar Correa. He was having lunch at the Local Room with his family earlier this year when he told Harris that the city needed a brewery.

“He’d learned our personalities and learned that once he threw it out there, we wouldn’t be able to ignore it,” Harris said.

Harris emphasized the importance of investing in a growing community like Locust and talked about the meaning behind the group’s mission statement “Be Local.”

“Locust presents unique opportunity, one that most of us that are from this area are starting to realize,” he said. “We want the community to eat local, drink local, shop local, but most of all, we want them to be local.”

Doing everything they can to make sure Locust is a vibrant community is critical to the owners as each either lives in or is planning to relocate to the area.

The new business in many ways is a byproduct of the city’s growth in recent years, thanks to its close proximity to Charlotte.

“I think Locust Town Center is poised for some serious growth and development in a way that is going to benefit not just Locust but Stanly County as a whole and will move us in the right direction,” said Correa, who’s been working with Harris and the other owners for about two years.

Locust Planning Director Scott Efird said he anticipates The Brew Room “will be another jewel in the crown of Locust and what we’re doing.”

By opening the brewery, Harris and the other owners are hoping to fill a void that exists in the area. While many people pass through the city, it doesn’t offer many amenities for people wanting to enjoy a night out.

Similar to popular hangout spots like NoDA, Davidson and Plaza Midwood, which feature eclectic restaurants and breweries, Harris wants to put Locust on the map as a “destination place” for people wanting to get together and have a good time.

And he doesn’t just want to stop with the brewery. TLR Holdings is also purchasing two additional adjacent parcels for the development of complementary services to the brewery and the town center.

It’s all part of the upcoming Village at Locust Town Center, which will be an assortment of shops, restaurants, town homes and condominiums totaling about 10 acres, according to Angela Prince, marketing director for the Village. Developers with Oakboro Main Street Development are the ones helping to construct the Village.

The Village will be a “central gathering place for people” living in Locust Town Center, Prince said.

One driver had to be hospitalized in a two-vehicle traffic incident Monday on Millingport Road. The driver of a Forrest... read more