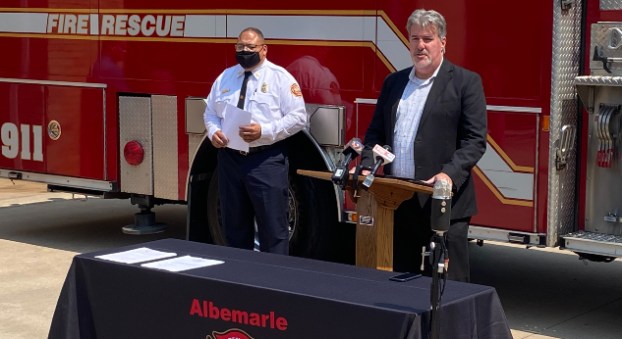 As a result of the COVID-19 outbreak within the Albemarle Fire Department, all fire personnel, except for battalion chiefs, are currently on a critical care break until Monday.

The information came during a news conference Wednesday morning at the Albemarle fire station No. 1.

While receiving time off to take care of themselves, the department has worked with the Office of the State Fire Marshal to coordinate sufficient crews to provide full coverage for the city. Firefighters with the Concord and Kannapolis departments are providing daily assistance.

“This is not new to us,” Chief State Fire Marshal Brian Taylor said about working with local departments through the state’s mutual aid system combating coronavirus outbreaks.

Ten cases have been reported, with three firefighters in the hospital, City Manager Michael Ferris said. He noted one individual has already been medically cleared to return to work and expects five others may return later this week.

City officials previously said the first positive case was reported July 9, but it is still unclear how the outbreak started. Officials would not speculate about how it started. There have been no new cases since July 16, Ferris said.

This outbreak comes as cities across the country are seeing increases in new cases because of the spread of the highly contagious delta variant. New cases in the county increased 94 percent from the end of last week (35 new cases) compared to the week prior (only 18), according to weekly data from the Stanly County Health Department. There are currently eight people hospitalized with the virus.

Through Wednesday, only 32 percent of Stanly residents are fully vaccinated, one of the lowest rates in the region and the state.

“Any time a firefighter’s affected, regardless of injury or illness, an unhealthy level of stress takes its toll mentally, physically and emotionally,” Albemarle Fire Chief T. Pierre Brewton said.

He added that firefighters taking some needed time for themselves “is important for any healing process.”

Brewton mentioned all stations and apparatuses are being sanitized each day. Fire staff are being given daily temperature checks and asked questions to prevent the spread of the virus. The fire stations are closed to the public and all non-essential activities have been suspended.

Brewton would not specify whether the firefighters who haven’t been hospitalized were symptomatic, saying the department was following all local, state and federal guidelines. Contact tracing has been going on and all potentially exposed firefighters have been quarantined, he said.

He would not go into specifics regarding whether the infected firefighters were vaccinated, noting the city does not have any policy requiring its employees to get vaccinated.

County Commissioner Peter Asciutto, a vocal proponent of vaccinations who was at the event, spoke to the media afterward about getting vaccinated. He said his hope is that city officials do their part to “promote the positive aspects of the vaccines.”

“I just encourage the community to really think about getting vaccinated,” Asciutto said.

He said while vaccines do not cost anything, “a trip to the emergency room, to the doctor, time off of work and the funeral home, they’re not free.”

He said one of his big fears is not contracting COVID-19 but unknowingly spreading it to others who might be at a higher risk of getting seriously sick.

With new cases and hospitalizations on the rise, people encouraged to get vaccinated

As the highly contagious Delta variant continues to spread (it currently accounts for 83 percent of new cases), areas all... read more