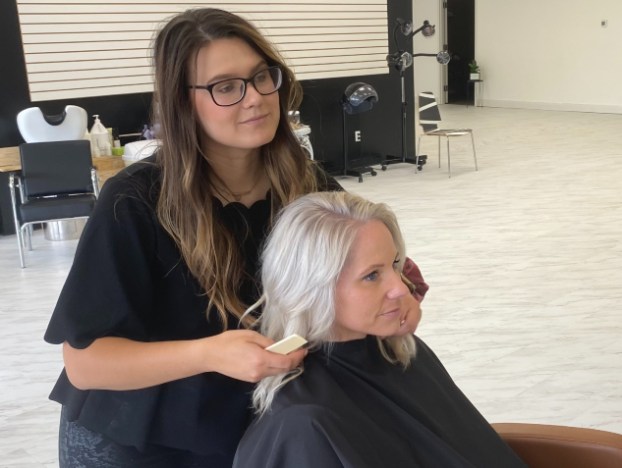 A new hair salon recently opened in Albemarle with a unique name and backstory.

The name is a personal tribute to Lambert’s daughter, Quinn, who was born Feb. 19, 2020 at 5:54 p.m. The birth of her daughter was the inspiration and boost Lambert needed to open her own business.

“It was just one of those things that Quinn did [that needed] to be recognized because she is just my world,” Lambert said. “She changed my life.”

An Albemarle native, Lambert, 23, knew she wanted to work in a salon ever since she was a young girl straightening out her sister’s hair. Having a cousin who lives in Alabama, where she would frequently vacation, Lambert received her cosmetology degree from Shelton State Community College in Tuscaloosa. She got her license shortly before the pandemic.

She stayed in Alabama for three years, where in addition to her degree she also gained experience working at her cousin’s salon, before moving back to Albemarle at the end of 2019.

After consulting with her cousin and mentors, Lambert made the decision in late January to take the plunge and start her own business. As a former employee of Gold’s Gym, Lambert knew the area and so she jumped at the chance to lease the property, which used to be a florist shop, when it was available.

“It was basically for me to be able to love my job again,” Lambert said about wanting to open her own salon, “and I was not getting that working in another salon.”

Work on the space began immediately after Lambert signed her lease towards the beginning of the year.

“So when I signed my lease, I quickly came over here and started tearing carpet up,” she said. “I was ready to go.”

“She’s killing it here,” added customer Miranda Daigle, who’s been to Lambert two times. “There’s a ton of people out everywhere asking about her salon and how it’s going.”

Lambert specializes in balayage, a highlighting technique that doesn’t use foils. She works alongside two other ladies who rent space from her: Tilwanna Polk, a stylist who specializes in hair braiding, and Tara Hamrick, an esthetician who performs facials and waxing.

“It’s a change from the places that I have been before, but a very good change,” said Hamrick, who’s been at the salon since Lambert opened. “I told Vica that I wanted growth and that’s what I’ve gotten since I’ve been here.” 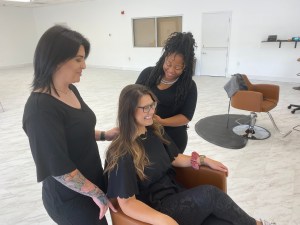 Lambert is still busy renovating the space. A spray tanning room will be added as will additional space for special events like bridal showers.

It’s fitting that Quinn, now 16 months, who was Lambert’s driving force behind opening the salon, also happened to be her very first customer.

“She was just like a life changer in a way that people don’t exactly tell you” before you become a mother, Lambert said.

The salon is generally open Monday through Saturday, though there are no set hours; instead people can call 980-581-8616 to make an appointment. 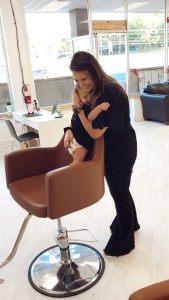