Superintendent Jarrod Dennis with the 2020-2021 Teacher of the Year Karol Garcia of Endy Elementary. Photo courtesy of SCS.

SCS announces Teacher, Principal of the Year, other honors

Stanly County Schools has announced several end-of-year awards, including Teacher and Principal of the Year.

While the past year has presented teachers and staff with many obstacles, “one thing that has remained consistent: both staff members and families of Stanly County Schools students have worked hard to ensure our students are taken care of,” said Lynn Plummer, director of Elementary Education and AIG, who presented the awards.

“Today is a celebration,” he added, “what better way to end the 2020-2021 school year than by recognizing some of our very own dedicated SCS employees.”

The three finalists for 2020-2021 Teacher of the Year were Jennifer Baucom, who teaches kindergarten at Badin Elementary; Karol Garcia, who teaches the dual immersion language program at Endy Elementary; and Kim Shaver, who teaches seventh and eighth grade ELA at North Stanly Middle.

The winner, announced by 2019-2020 Teacher of the Year Tina Carter of North Stanly High, was Garcia.

“Students need to feel loved, cared about and important in a classroom,” Plummer said, reading comments from Garcia. “If you make a student feel that you care about them, that you love them, that what happens to them is important, then they will want to come to school because they will feel safe by your side.”

The three finalists for Beginning Teacher of the Year were Casey Lemons, who teaches agriculture at South Stanly High; Britany Murphy, who teaches second grade at Aquadale Elementary; and Melissa Woods, who teaches fourth grade at Endy Elementary.

The winner was Lemons.

The three finalists for Principal of the Year were Megan DePasquale of Millingport Elementary, Dr. Erik Johnson of East Albemarle Elementary and Kelly Dombrowski of Oakboro Choice STEM.

The winner, announced by 2019-202o Principal of the Year Jennifer Huneycutt of West Stanly Middle, was Johnson.

Plummer noted that as principal, Johnson works to build a collaborative environment, “where teachers come together so that learning becomes more accessible and effective for students.” 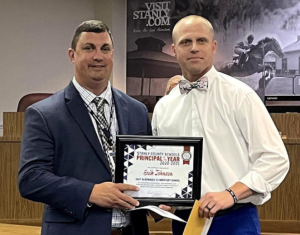 Superintendent Jarrod Dennis with Dr. Erik Johnson, principal at East Albemarle Elementary. He was selected as the 2020-2021 Prinicpal of the Year. Photo courtesy of SCS.

The three finalists for Assistant Principal of the Year were Wendy Harward of Albemarle Middle, Laura Huneycutt of Stanly Early College and Judith Wherritt of East Albemarle Elementary.

The winner, announced by 2019-2020 Assistant Principal of the Year Katrice Thomas of South Stanly Middle, was Wherritt.

“I’m extremely impressed with the group of talent we have in all those different areas,” Superintendent Jarrod Dennis said.