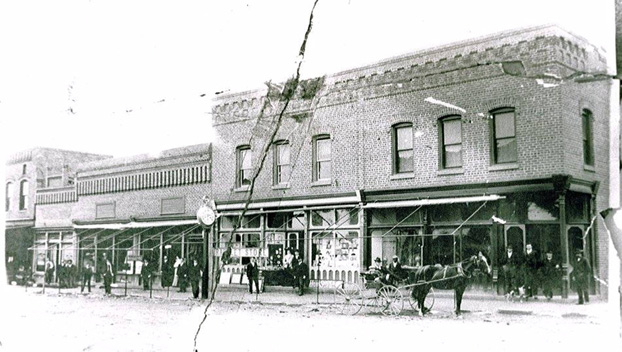 PEEKING INTO THE PAST – The King Building

The building located on the southwest corner of the square in Albemarle (far right in the picture) was originally owned by Dr. O.D. King who had paid $208 for the lot. The building was completed in late 1899.

The first business, a general merchandise store known as Parks & Peden, moved in during mid-January 1900. Due to a change in ownership, the business name was changed to Cotton & Peden in February.

Mauney’s Drug Store moved across the street into the new Trust Building in March 1906, and Allen Clothing Store opened in its place.

Allen’s was owned by H.B. Allen of Wadesboro and was managed by T.C. Rivers. Allen retired from the business in 1916, and Rivers left in 1924. A succession of owners followed until the business closed for good during the mid-1990s.

Since Allen’s closed there have been a number of businesses located in this building “on the corner.” These businesses have included J. Talbert Clothing, The Republican Party, Lottie Dot’s, La T Dah Boutique and Tony’s Art Joint.

It’s been a week of highs and lows for me. While I had a pretty great day last Saturday, I... read more