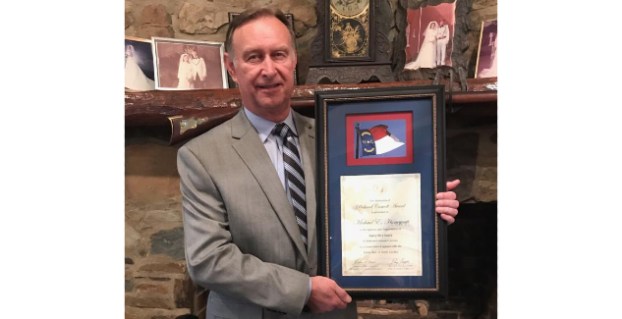 Michael Huneycutt has accumulated quite the public service career in Stanly County.

He has spent 14 years as the Clerk of Superior Court and before that he was a teacher with Stanly County Schools for 31 years.

Due to his 45 years working for the state, Huneycutt, 67, was recently awarded the Richard Caswell Award for his service.

“I am very honored to be recognized for this achievement,” said Huneycutt, who lives in Millingport.

He said he was surprised when he received a phone call in February about the award.

A Stanly County native, Huneycutt taught at New London Elementary School for one year in the 1970s before transitioning to West Stanly High School, where he spent 30 years teaching electronics and essentials to networking.

Huneycutt is no stranger to politics. He spent 16 years as treasurer of the Stanly County Republican Party, and his father, Melvin Huneycutt, and wife, Pattie Huneycutt, both served as county commissioners. He ran for county clerk in 2006 following the retirement of David Fisher. He got elected in November 2006.

“I saw the clerk’s job as just a way to continue helping people,” he said, noting he unsuccessfully sought the position four years earlier.

Looking back on his career as a clerk of the court, he said it’s been “my privilege and honor to help people navigate some of the waters” of the judicial system.

While working as a teacher and a county clerk are two different positions, they both involve working with and helping the public, which Huneycutt has enjoyed.

“Both in general have been rewarding because I’m able to help the public as individuals,” he said, adding that one of the best feelings as a teacher was always when former students reconnected with him and told him what they learned in his class resonated and stuck with them.

Huneycutt is still enjoying his job as clerk and has no plans to retire.

He was one of 17 employees who received the award, according to a state press release. The recipients, who work at seven state agencies, join the ranks of long-serving employees who have earned the award since it was established in 1998 in tribute to North Carolina’s first governor.

Robbin Creech of Stanfield received the award last year for her time with the Mecklenburg County Clerk’s Office.

“Especially during the COVID-19 pandemic, we are grateful for the deep institutional knowledge and steadfast experience of our Caswell Award honorees,” State Human Resources Director Barbara Gibson said. “Together, they demonstrate the vast scope of job opportunities across state government, and the satisfaction of a public service career that spans five decades.”

Richard Caswell was a Maryland native who dedicated most of his adult life to North Carolina. He was the first Orange County clerk of court before taking up arms during the Revolutionary War. He later became a member of the colonial assembly, where he was a champion for free public education. Caswell became North Carolina’s first governor, where he served from 1776-1780.

Atrium Health is launching a new COVID-19 vaccine trial for children and teens, the hospital has announced. The trial began... read more