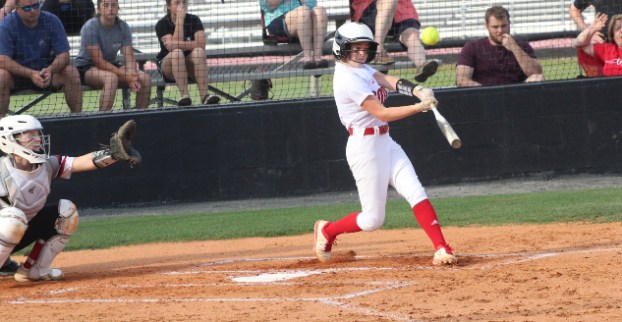 In a typical high school softball season, conference opponents see each other twice in the regular season and up to two times in the postseason.

This season, softball teams in the YVC like South Stanly and Chatham Central only played each other in one conference game leading into Wednesday’s second-round playoff game.

South jumped out to an early lead and never looked back in a 12-0 five-inning win, advancing to the round of eight.

The Bulls (13-2) posted the team’s fourth straight game with 10 or more runs, increasing the team’s runs per game average to 9.5.

Earlier in the season, the Bulls beat Chatham (11-3) 2-1 in a walkoff win, but the team had something to prove against their conference foe.

“I think (playing Chatham) gave us a drive to win…(the previous game) helped me to focus in on this game and want to push even harder,” sophomore Kassie Swink said.

Bulls starting pitcher Sadie Lee did not allow a hit for 3.2 innings, earning the win for the Bulls allowing two hits over five innings with no walks and four strikeouts.

Alexis Harward had three hits and four RBIs in the game hitting two spots behind Barrier. The sophomore said it was important for the entire lineup to produce offense.

“We have to work together definitely. We can’t have the four seniors do it all,” Harward said. “We’re all working together, moving runners and putting (the ball) in spots (the defense) can’t get to.”

Harward also helped maintain the shutout with a diving stop at second base in the top of the fourth.

“Everybody has to put in work. It doesn’t just happen with a certain amount of people. It takes a whole team,” Swink added. “We work hard. There are no light days.”

Lee helped her own cause by adding three RBIs while sophomore Mattie Poolos had a solo home run to lead off the third.

“When you can hit one through nine or put the ball in play…how do you prepare? I’m proud of this team,” Poplin said.

The Bulls host No. 4 seed Alleghany (11-5) Friday night in a third-round playoff matchup.

The No. 8 seeded Colts handed the Panthers the team’s first loss of the season while staying undefeated with a... read more