Several residents voiced their concerns with Albemarle City Council recently about a vacant property on Pee Dee Avenue they say is overgrown with vegetation and has over the years become not just a nuisance, but a threat to public safety.

“We have been concerned for many years about the property on the corner of 10th and Pee Dee,” said Linda Francis, who noted 10 other neighbors were also in attendance. “And I think if any of you had to look at that from your front porch you would be concerned also.”

One of the problems centers around a large oak tree at the edge of the property. 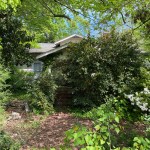 Overgrown vegetation at the property located at 919 Pee Dee Avenue has been a problem for many decades. 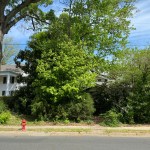 Due to the tree posing a threat to public safety, the city is looking into removing it.

Priscilla Alford, who lives across the street from the property, told council she was worried that eventually the tree “is just going to come down either on a car driving by…or on one of our houses.” If it fell, she said it would likely seriously damage her roof.

The city has worked to mitigate the issue over the past few decades, but problems keep arising.

While the property taxes are paid for and the utilities are on, the house is unoccupied and is being used for personal storage, said Kevin Robinson, director of the city’s planning and development services, who has spoken with Francis about the issue.

Other than declaring the property a nuisance and issuing a civil citation, there are only a few options the city can take in dealing with the property, such as mowing the yard and cleaning up trash. The Public Works department recently cleaned up the right of way where vegetation was growing on the sidewalks.

Local ordinance and state law do not allow for city staff to clean up overgrown trees and bushes on the property and staff hasn’t found any noticeable evidence of problems with the house itself — cracked windows, holes in the roof, crumbling foundation — that could warrant investigation for minimum housing violations.

“I have no doubt there may be something going on inside the house, but we can’t just really get in to look at it yet,” Robinson said.

Public Utilities Director Judy Redwine said the tree is a hazard to public safety and “needs to come down,” though usually in these circumstances the city works with the property owner. Redwine sent a letter last summer to the owner, who lives in Charlotte, about removing the tree, but the city never got a response.

Redwine said if the tree ever fell, it would take down the main primary line all the way to Cotton Avenue.

Councilman Dexter Townsend noted that if the city made arrangements to remove the tree from the property, it could set a precedent for removing overgrown trees or vegetation from other houses.

Councilman Bill Aldridge encouraged staff to empathize with the nearby residents who shared their concerns and to continue to work to address the issue.

“I think we have to treat this scenario like it’s the house right beside where we live,” he said, “because all these folks out here are obviously not happy with, nor would any of us be happy, if this was in our neighborhood.”

Councilman Benton Dry put forth a motion giving city attorney Britt Burch the go-ahead to research the issue to make sure the tree poses an imminent threat before officials remove it. The motion passed 6-1, with Townsend opposing it.