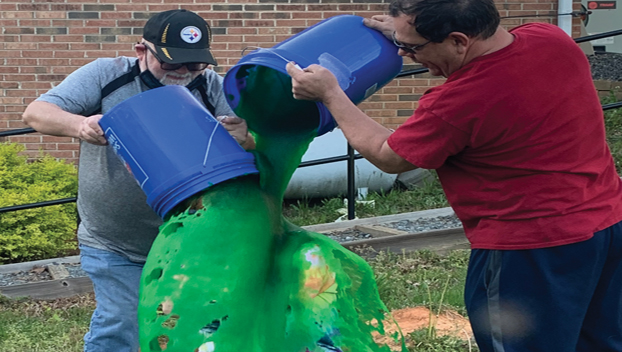 For Contina Salyer, fulfilling a childhood dream of getting slimed was well worth it.

Salyer, the Scoutmaster for Girl Scouts Troop 1061 in Locust, made a deal with her Girl Scouts that if they sold five boxes to 50 people at the final sale of the year that she would be slimed.

“That last weekend, we’re typically done with selling cookies,” Salyer said. “We usually try to give them an extra incentive — make it a little fun while still setting their goals.”

Each of the troop’s three booths reached the quota.

“It was definitely a sticky feeling,” Salyer said of being slimed. “I remember growing up watching the Nickelodeon show and thinking that would be something good to do. Yeah, not now.

“The things we do to encourage girls,” she added.

Even with restrictions, that is an increase for the troop of 38 girls and the county. All five of the county’s troops, which have about 20-30 girls each, reported sales above that of 2020. 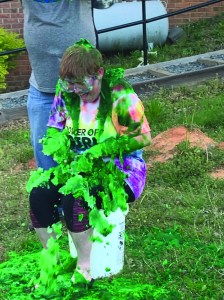 Contina Sayler gets slimed after her Girl Scouts reached their goal on their final weekend of cookie sales.

“None of our troops really anticipated selling a lot because of all the restrictions,” Salyer said. “Stores didn’t want us to set up at store fronts.”

She is grateful to the stores that did allow cookie sales, as well as the drive-thru cookie booth.

“Locust Presbyterian let us set up on the lawn,” she said. “They gave us their order and we prepared the orders.”

Digital sales were also up.

“That was a really big push this year and going contactless,” she said.

The state’s professional association for public school teachers made a stop in Albemarle Saturday as part of a statewide initiative... read more