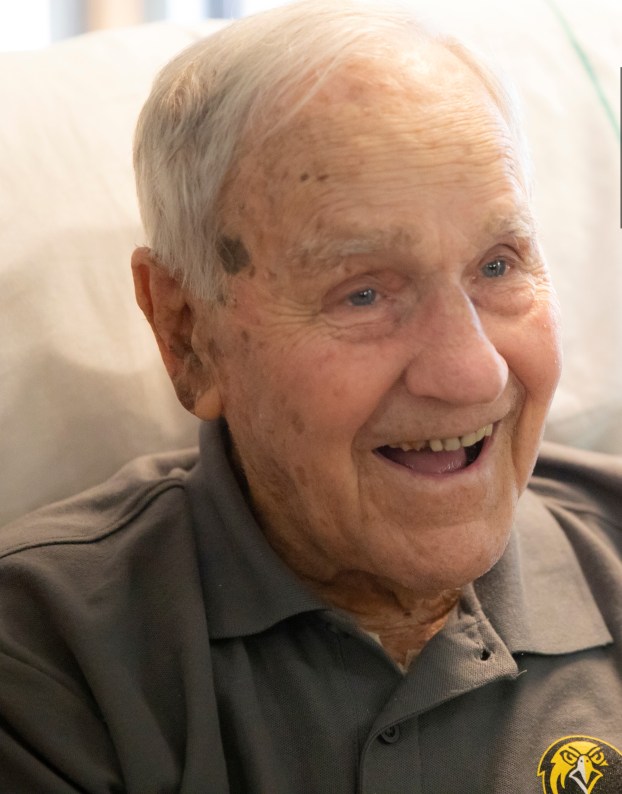 Pfeiffer coaching legend Joe Ferebee celebrated his 100th birthday in 2019 with a gathering of former players and friends.

The late Joseph S. Ferebee Sr., Pfeiffer’s legendary baseball coach, “was a remarkable teacher. He touched us all, and his lessons have lasted us a lifetime. We love you, Coach.”

With these words, 1968 Pfeiffer graduate Bob Gulledge, a close friend of Ferebee’s who played for him at Pfeiffer, opens a new book called “His Field, Our Dreams: A Lifetime of Baseball with Legendary Coach Joe Ferebee” (Palmetto Publishing). Proceeds from sales of the book will benefit Pfeiffer’s baseball program.

Ferebee, a native of Mocksville, became the winningest baseball coach in North Carolina college and American Legion history. Between 1956 and 1987, he won 677 games as Pfeiffer’s head coach. He won another 694 as the coach of several American Legion teams, four of which won state titles. He led Salisbury High School’s baseball team to a state championship in 1955. 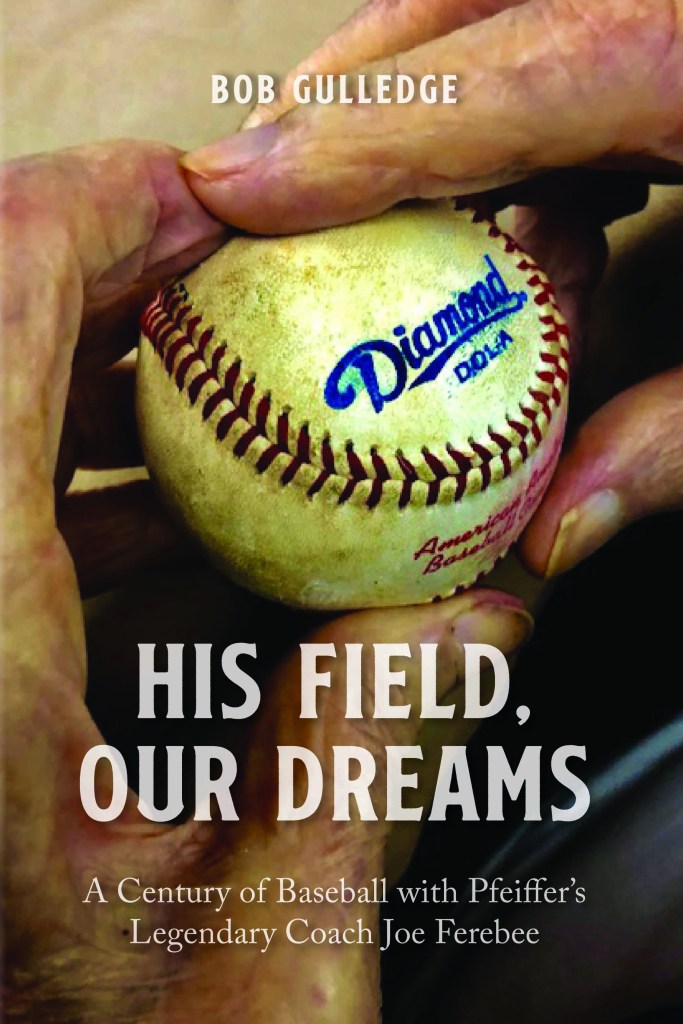 A book of memories about Joe Ferebee has been compiled by his former players.

Throughout the book — which Gulledge and Gary Weart, a 1971 Pfeiffer graduate, helped compile — many of Ferebee’s former players and friends pay tribute to him. All told, 67 people have contributed remembrances in the book, which has been edited and proofed by Margaret Whitt, a 1968 Pfeiffer graduate. Weart recruited some contributors, wrote his own piece, impacted the design of the book’s cover and title, and supplied many of its photographs.

“Each individual writer made an A+ on his or her story,” said Gulledge, who played second base behind Griggy Porter, a 1969 graduate, who just missed being called up to the Chicago Cubs’ major league team. “When you read this book, you will see that Coach picked his players on merit but loved us all. Many of us became close friends of his after Pfeiffer. Recruiting all these people for the book was not a problem because they all had great respect for Coach.”

“His Field” is definitely an example of teamwork learned from a master.

Marty Brennaman, the Hall of Famer voice of the Cincinnati Reds for 46 years until his retirement in 2019, has written the book’s foreword. He first encountered Ferebee’s coaching prowess when he called American Legion games.

Among the book’s contributors is the late Braxton Richmond “Brack” Bailey III, a 1960 graduate who lived in Bermuda Run. Bailey died this past January, shortly after contributing to “His Field.” He was among the first Pfeiffer players recruited by Ferebee. After graduating Pfeiffer, he played seven seasons in the minor league system of the Los Angeles Dodgers, achieving a promotion to Triple-A ball in the process.

Tommy Eaton, a 1960 graduate and the star of the Salisbury state title winners and the third-place finishers in the 1955 Little World Series, was Bailey’s first Pfeiffer roommate. He died shortly before Bailey did. After playing for him, both Eaton and Bailey became lifelong friends of their former coach.

In “His Field,” Bailey calls Ferebee “the best teacher of baseball fundamentals for whom I have played,” including Hall of Famers Tommy Lasorda and Duke Snyder.

Another contributor to “His Field,” 1981 Pfeiffer graduate Don Bertie played four-and-a-half years in the Houston Astros’ minor league system. He became one of “the boys from New York” who came to Pfeiffer to play for Ferebee.

Before Bertie visited the school, he had only spoken with Ferebee on the telephone. After arriving on campus, Bertie had to go looking for his new coach. When he found him, he was raking the infield, separating weeds from grass. Ferebee “occasionally reached down and grabbed a weed or a blade of glass, asking me if I knew what it was,” Bertie says in the book. “That was Coach’s first lesson on life, based on edible grass and weeds.”

Contributor Neil Shouse, a 1966 graduate, became the baseball coach at Mount Pleasant High right after playing for Ferebee at Pfeiffer. He took that team, which had a .500 record in the year prior to his arrival, to the state finals. He credits his success to the “Ferebee way,” which entails totally absorbing the game and being involved in every minute detail.

“His Field” is the idea of Gulledge, who only wishes “we could all read the book to Coach.” It is the latest of several ways that Pfeiffer’s baseball alumni have been working to keep Ferebee’s memory alive. In 2019, they celebrated Ferebee’s 100th birthday by making a three-part gift to Pfeiffer.

The gift included commissioning 1984 graduate Mark Stephenson to paint a portrait of Ferebee that hangs in Merner Gymnasium, establishing the Joe Ferebee Award and starting a Legacy Fund. The award is to be given annually to a player who best exemplifies Ferebee’s values, and the fund provides annual support for Pfeiffer’s baseball program.

“It became a way for us to help people, especially those in the Pfeiffer community, remember Coach Ferebee’s legacy and accomplishments,” he said. “We also hope to make a little money for the baseball program.”

Ken Keuffel, who authored this article, has served as Pfeiffer’s assistant director of communications since December 2019. He welcomes story ideas from Pfeiffer’s faculty, staff, students, alumni, and friends. The form for submitting story ideas is at www.pfeiffer.edu/newsform.​