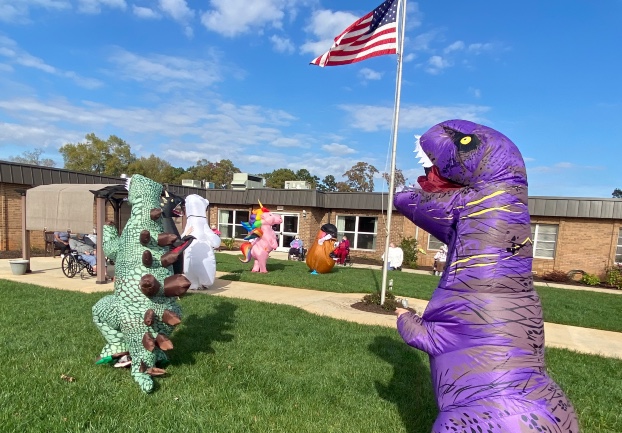 The Dino DoGooders dance around the residents at Trinity Place.

Dinosaurs invaded the grounds of Trinity Place in Albemarle, but unlike their predecessors who roamed the earth millions of years ago, this iteration looked a little different — and they had style.

Comprised of a small group of eight individuals dressed in colorful inflatable costumes, these dinosaurs — along with a Mr. Potato Head, pink unicorn, alligator and polar bear — had one goal: Spread as much cheer to the residents as possible. For roughly 45 minutes, the crew danced their way around the grassy courtyard to songs such as “Higher Love,” “Uptown Funk” and “Love Train,” while excited residents, situated on the surrounding sidewalk with their masks on, clapped their hands and laughed with joy.

“Seeing everybody’s faces light up, it gives us joy and it gives us hope,” said Valerie Pinnock, who was one of the people dancing at Trinity Place. “And honestly, we look forward to it as well. It’s a good time for us and it’s a safe way for us to spend time with our friends.” 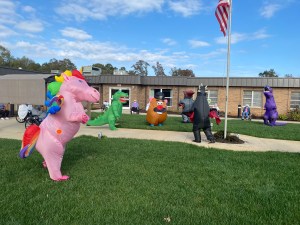 The Dino DoGooders dance around residents at Trinity Place.

The group, known as the Dino DoGooders, has been spreading joy at various nursing homes throughout the area for the past several months. After performing at Trinity Place, they later danced for residents at Bethany Woods and Forrest Oakes. In total, the group has performed at 16 nursing homes in the area, though this was their first time in Stanly County.

Tracy Dean, who is the life enrichment assistant at Trinity Place, was one of the people who donned a costume, suiting up as a green alligator. This was her second time dancing with the group, after having previously performed at a nursing home in Concord.

“It fills your heart,” she said about dancing in front of her residents. She had been advertising the event to her residents all week, with much fanfare.

“We’ve had so many challenges with Covid that it’s great to see people thinking outside the box and making ways to keep the residents happy and keep them smiling,” she said.

Dean added: “I’m sure this will be the talk of the home for weeks to come.”

Jayante Haldar was one of the residents who appeared to have the best time. He constantly waved his hands whenever any of the performers got within six feet of him.

“It was wonderful,” he said about the event. “That’s a great group. It was real fun to sit down and see them dance in front of you.” 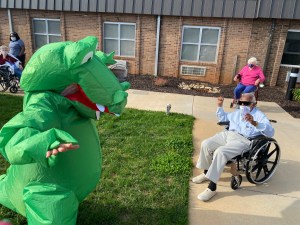 Tracy Dean as a costumed alligator dances near an excited Jayante Haldar.

The Dino DoGooders was created in Concord in April when a group of women, including Pinnock, donned inflatable dinosaur costumes and danced and practiced yoga outside Crescent Heights Retirement, bringing joy and laughter to the many residents inside.

For Pinnock, though, her Dino journey began a few years earlier when in 2017 she purchased dinosaur costumes for her family as a way to cheer up her father who had cancer. She said he had always enjoyed watching internet videos of people dressing up in costumes.

Pinnock said the group mainly focuses on dancing outside of nursing homes because the people living in them are more isolated right now due to the pandemic. The performers will often dance in front of residents’ windows.

Videos and photos of the group, which are posted on their website, quickly erupted like wildfire across the internet. Videos of the women dancing quickly went viral and have even been featured on national media outlets, including both “Good Morning America” and “Live with Kelly and Ryan.”

The group has become so popular that Pinnock says “we almost got a waiting list of people who want us to go out and spread joy to them.” They try to visit locations twice a month, she said.

In addition to the Concord group, several others have started both across the country, including in California, Massachusetts, Virginia, and Montana, and the world including in New Zealand and Australia.

As for the future of the group?

Pinnock said the Dino DoGooders have events scheduled through February, though they plan to continue adding more. They already have scheduled four nursing homes on Dec. 5 for a Christmas-themed event.

“It’s honestly therapeutic to us as we’ve built new friendships and we laugh through the entire day,” she said. “I always drive home feeling amazing and full of love.”

“I will keep doing this as long as there is a demand for it, which is hopefully for a long time,” Pinnock added.