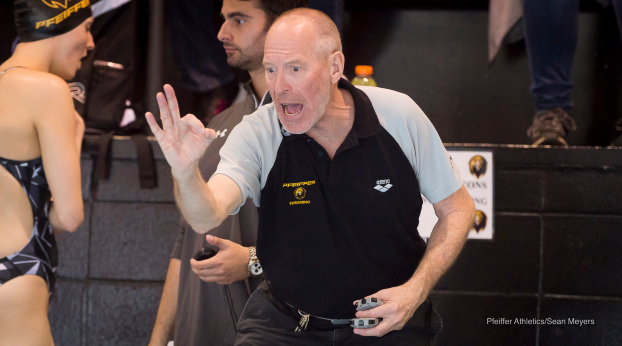 Note: The following is a release from Pfeiffer University.

Brad Flood, who has led the Pfeiffer University women’s swimming team since 2018, has announced his retirement.

Flood was hired as the head coach of the Falcon swimming program and served as the Aquatics Director. In addition to his coaching duties, he also taught coaching as an adjunct professor in the University’s Division of Education.

Since he arrived in Misenheimer, he has guided the Falcons to numerous individual top-3 podium finishes in the SunCoast Swimming Championships. During the 2019-20 season, he helped Tiffany Bartholomew achieve the SunCoast 100m breaststroke championship and an all-conference award. All told, Flood has had nine swimmers earn all-conference honors over his tenure. His 2019-20 team also earned the Scholar All-America Team Award from the College Swimming Coaches Association of America (CSCAA) by posting a GPA of 3.63, which ranked the Falcons ninth out of 187 NCAA Division III teams. The 3.63 GPA placed Pfeiffer second among teams from North Carolina, ahead of Duke, N.C. State, Davidson, and North Carolina, among others.

“I thoroughly enjoyed my time coaching at Pfeiffer. Working with my fellow coaches, administrators, and the student-athletes was such a joy for me,” said Flood.

“Pfeiffer is a special place and has a tremendous family-like atmosphere. I’ll miss that atmosphere and, most importantly, the student-athletes that brought so much happiness and joy to me.”

“Brad was not only a tremendously successful coach over his career, but he was also a very loyal Falcon,” said Director of Athletics Danielle Lafferty.

“He has such passion for the sport of swimming and his student-athletes. Brad has made Pfeiffer and our program better by bringing energy to work that is hard to match. All will miss him, and we wish him all the happiness as he moves into retirement.”

Before Pfeiffer, Flood served as the head coach at the University of Bridgeport in Bridgeport, Conn. Flood started the women’s program in 2003 and the men’s program in 2009. While in charge of the Purple Knights, he coached Oscar Pereiro to four-consecutive NCAA Division II titles in the 100-yard backstroke. In total, he helped guide three swimmers to eight individual NCAA titles, three relay teams to NCAA titles, and had two athletes set NCAA records.

He also coached 14 different female athletes to 16 individual and eight relay All-America designations over his tenure.

During his collegiate career, Flood is the only coach in NCAA history to have coached a four-time NCAA men’s Individual event champion at both the NCAA Division I and Division II levels.

In addition to his collegiate coaching experience, Flood served as the head coach with the Polish National Swimming Federation from 1992-2005. Over that span, Flood coached Rafal Szukala to the silver medal in the 100m butterfly in the 1992 Barcelona Olympics.

Flood has also had prior coaching experience at Central Connecticut State, Clemson, Texas A&M, and the University of Iowa.

Brad Flood, who has led the Pfeiffer University women’s swimming team since 2018, has announced his retirement. Flood was hired... read more