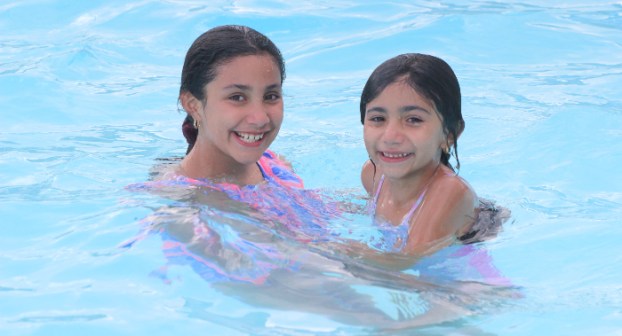 Emma and Camille Little are all smiles swimming at the West Stanly Community Pool. (Photo by Charles Curcio/staff)

Pool a hot spot for cooling off

One of the last traces of a normal summer in Stanly finally appeared recently as the West Stanly Community Pool opened its gates.

With many pools choosing to remain closed for the season, the Stanfield pool has opened under the restrictions of Gov. Roy Cooper, working at 50 percent capacity with numerous new health and safety guidelines.

“We are just thankful we can provide a service to the community,” owner Patty Huneycutt said. “We have a lot of local people who come here in the summertime.”

Always attracting families from near and far, the pool has had inquiries about being open from as far away as Rockingham County and even up to Virginia.

Huneycutt said she felt bad for kids who are not able to go to their own local pools and can’t get to Stanfield.

“We had a finely-oiled machine,” Huneycutt said about the pool before the COVID-19 situation. She said swim lessons would be taught before the pool was open in the morning and afternoon and booked many evenings for private parties.

Normal capacity of the pool is around 150 people which includes a small deck in the back.

“We’re just excited for everybody to come. We’ve got our people who come here since we opened back up and a lot of new faces, too,” Huneycutt said.