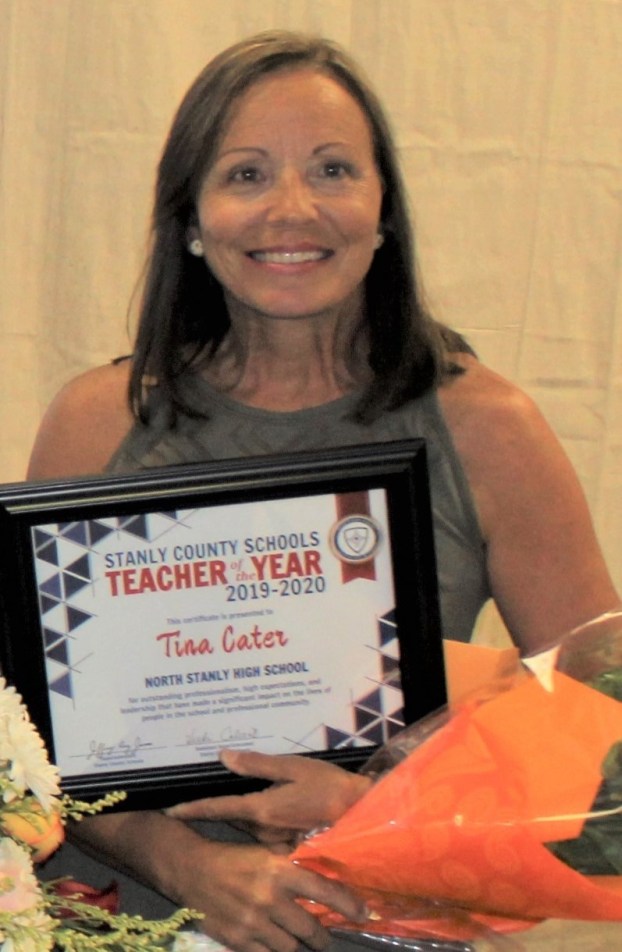 ‘Before you teach, you have to reach’: North’s Carter named Teacher of the Year

When it comes to being named Stanly County Schools’ Teacher of the Year, Tina Carter has come close twice, but has never been awarded the title.

As Carter, who teaches drafting at North Stanly High School, left her house two weeks ago for this year’s announcement after being a finalist yet again, her daughter wished her luck. Carter jokingly replied: “You know the third time’s either the charm or I’m going to strike out.”

Carter was a finalist last school year and three years prior.

On her third try, Carter, 59, who has coached a plethora of sports in her career, finally hit a home run and was recognized as the 2019-2020 Teacher of the Year.

“It just validates all the hard work and the hours that you do put in,” Carter said about receiving the title.

She said she was humbled to be associated with the other four finalists: Karen Brown of West Stanly High, Amy Crisco of Albemarle High, Emily Furr of Endy Elementary and Tamara Furr of South Stanly Middle.

Carter said the award is not only about her — it’s an extension of all the teachers and staff she has worked with over the years who have inspired her to become a better teacher.

‘Before you teach, you have to reach’

While in class, Carter is constantly in motion, walking around to every student to talk with them, get to know them and let them know she cares. She always wants to teach them something new, even if it’s not strictly within the confines of her drafting curriculum.

Her teaching philosophy is simple: “Before you teach, you have to reach.”

Regardless of her students’ background, learning history or the environment they have grown up in, “you have to make them feel like you’re invested in them and you have to connect with them,” she said.

The school system has clearly taken notice of her effectiveness at reaching and connecting with her students.

“Tina Carter is nothing short of phenomenal,” Superintendent Dr. Jeff James said. “Her love and passion for teaching almost beams from her face as she engages and challenges students to learn skills they use for life.”

And her skills at reaching others is not limited to just students.

“I can certainly say she has made a lasting impression on me as she has thousand of students,” James said.

Carter, a Badin native who now lives in the Millingport area, went to work in the private sector after receiving a degree in manufacturing technology from North Carolina State University. She spent many years as director of engineering at Huck’s Store Fixture in Albemarle.

Carter began teaching in 2008 as a drafting teacher at West Stanly High. She spent 11 years at West before transitioning to North Stanly two years ago.

She enjoys the challenge of trying to reach and engage with every student in her classroom, regardless of their aptitude for drafting. Her greatest challenge, she said, is reaching the students who might at first seem uninterested or unwilling to open up to her and learn about drafting.

“I’m not going to give up on them,” she said, noting that every student has worth. Comparing herself in the classroom to a little gnat, “I’m going to stay on you.”

She said her enthusiasm in the classroom is designed to teach her students an important lesson.

Though she wasn’t always the smartest kid in class, “I wouldn’t let anyone outwork me,” she said.

That’s something she preaches to her students on a daily basis.

In addition to her teaching duties, Carter has coached almost every sport offered at the high school level. During her time at West and North, she has helped coach volleyball, basketball, tennis, soccer and track and field. 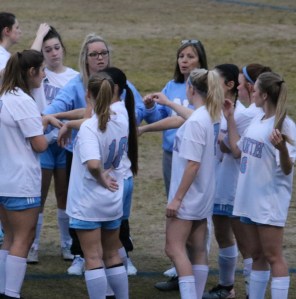 “I think I’ve coached everything except wrestling and football,” she said, noting that, as a huge sports fan, she wouldn’t be opposed to coaching football. Carter has even devised a few football schemes she would like to see implemented on the chance she gets offered a coaching opportunity.

Carter is taking a course at Embry-Riddle Aeronautical University and hopes to teach a drone technology class next year.

Teaching during a pandemic

No amount of teaching experience could have prepared Carter, or any other educator, for what has transpired due to the coronavirus pandemic.

Since drafting is such a hands-on class, working remotely has presented many challenges. Fortunately, the CTE program partnered with Stanly Community College, which has allowed students to access software to complete their drafting assignments.

Carter also tweaked her curriculum to ensure her students were not simply completing busy work but were working on creative assignments they would enjoy. In one of her drafting classes, for instance, she asked her students to build a Rube Goldberg machine using items found around the house.

“I got better participation when I gave them something they enjoyed doing,” she said.

Carter has also found the time to help the community. Since mid-March, she has been creating face shields to give to people in the area working on the frontlines combating the coronavirus.

She brought a 3-D printer home from school, along with two she already owned, researched how to make the shields on the internet and tinkered with certain designs until she discovered what worked best for her. She often uses YouTube videos to troubleshoot any design problems she’s facing.

Carter, who begins early in the morning and often will print shields until midnight, says she has produced around 375 shields, along with several hundred mask extenders. 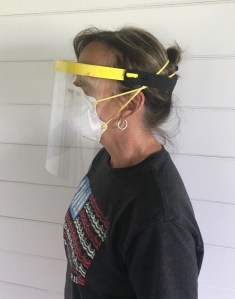 “I just know that it’s helping people,” she said about creating and distributing the face shields. “We got to lift each other up, especially now.”

Carter strives to make a difference in her students’ lives and give them hope.

She offers up the analogy about a man on a beach who encounters a thousand stranded starfish. Try as he might, he ultimately is able to throw only 10 back into the water.

Twenty-four hours after baseball returned to Stanly County with the NC3 juniors, the senior squad got their chance to play.... read more