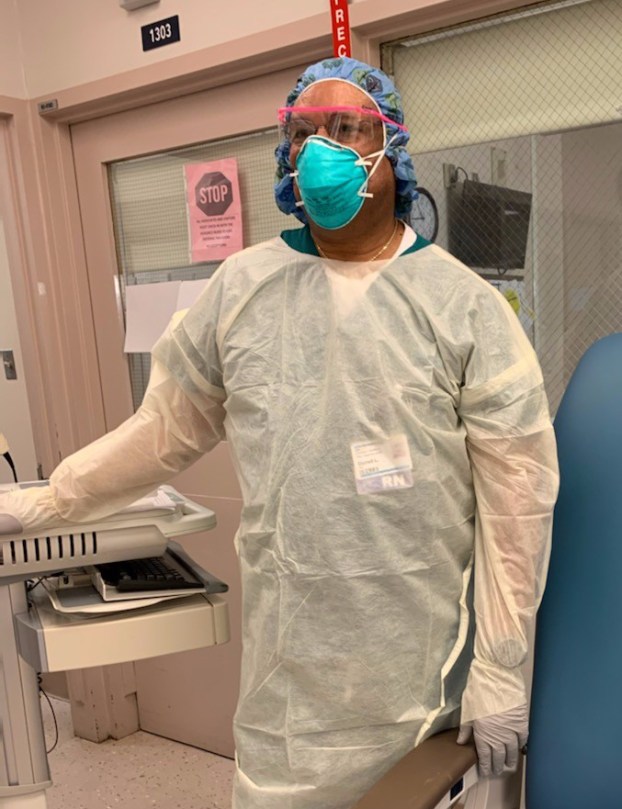 Darrell Little is a critical care nurse in Maryland who has seen his fair share of tragedy and deadly diseases during his 39-year career in the medical field.

From dealing with tuberculosis, the HIV/Aids epidemic and anthrax to training and preparing for the Ebola virus, Little has faced a lot during his career.

But the Stanly County native, 61, hasn’t seen anything quite like COVID-19, the disease caused by the novel coronavirus.

While many people have compared the virus to the common flu, Little said the flu “doesn’t kill people as quick.” He estimates he’s personally seen COVID-19 kill more people in a week than the flu has in a season. 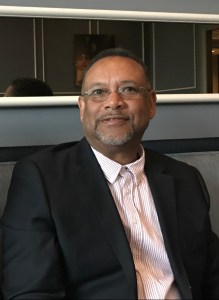 Little’s shifts often extend beyond 12 hours several days a week. He estimates about 95 percent of his patients have contracted the virus. He deals with patients struggling to survive while attached to respirators (once on them, patients are rarely taken off) and he experiences death on a daily basis.

Though he wears personal protective equipment, including gloves, face mask and face shield, he still worries about the possibility of coming home and infecting his wife. But he pushes past the anxiety, fear and uncertainty to continue helping patients.

And as a soldier on the frontlines fighting a deadly and invisible enemy, Little has no time to think about defeat, since the fate of patients are regularly in his hands.

“My father earned a Purple Heart and a Bronze Star Medal during World War II, two of my brothers served in the Vietnam War, my daughter earned a Combat Action Badge and Bronze Star Medal serving in Afghanistan and is actively serving in the U.S. Army,” Little said. “Today I am on the frontlines combatting COVID-19. I found it only right to continue the family’s tradition of public service and saving lives by taking care of the American people.”

Life on the frontlines

Little grew up in New London. He went to New London Elementary before attending North Stanly High School. Though he hasn’t been back to North Carolina in a few years, Little still has friends in Albemarle and his mother-in-law lives in Norwood.

While he initially thought about pursuing a career in music, he was pulled toward the hard sciences due to his sister being a nurse. He graduated from North Carolina A&T University in Greensboro in 1980 with a nursing degree. After stints working in North Carolina, California and Louisiana, Little settled down in Maryland in 1985.

Little serves as a rapid response nurse in Medstar’s critical care unit, where he’s worked for 11 years. He also trains new nurses and is contracted to United Medical Center under the department of anesthesiology to provide vascular access service.

In addition to his work at the hospital, Little also works with Chesapeake Mobile Healthcare, where he travels to regional nursing homes and additional medical centers to help residents that have contracted COVID-19. He provides them with peripherally inserted central catheters, which supply the body with fluids and antibiotics necessary for survival.

Based off limited testing results nationwide, Little, like many people, initially thought the virus wouldn’t be as dangerous and as lethal as it’s turned out to be. He said COVID-19 first appeared in Prince George’s County, where the hospital is located, in mid-March and got really bad in April.

“In no time our unit was filled up with coronavirus patients,” he said, noting that he’s aware of a few doctors and nurses that have contracted the disease.

Little’s critical care unit has 30 ICU beds, of which more than 90 percent are occupied each day to care for coronavirus patients.

With the increase in patients inevitably came the increase in deaths — to the point where funeral homes and morgues were routinely overwhelmed. Luckily, Little said the hospital hasn’t yet ran out of personal protective equipment like masks and gloves, which has been a big concern for many hospitals around the country.

As of Thursday, Prince George’s County, which is the the second most populous county in the state, has 8,150 confirmed cases (the highest in the state) along with 311 deaths, according to data from the New York Times. Statewide, Maryland has almost 30,000 cases and roughly 1,500 deaths.

Although he thinks the rate of death has recently started to decrease, he said hospitalizations seem about the same. He said Maryland is starting to test more people, which is invariably leading to more positive cases.

Little, along with the other nurses, do everything they can to make sure the patients — many of them on respirators clinging to life — have a chance to interact with their loved ones during what’s likely their final days. They help the patients FaceTime with family and even allow loved ones a chance to visit, as long as they are wearing adequate PPE.

Since nurses can seem alien with all of their protective gear, Little said they’ve begun to attach pictures of themselves on their chest so patients know what they look like and can feel a little more at ease. 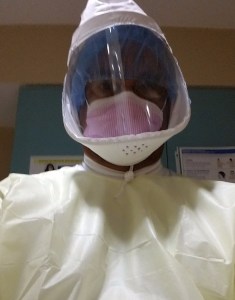 Darrell Little decked out in all his personal protective equipment. Photo courtesy of Terez Little.

While experiencing death can be overwhelming for anyone, including nurses, they experience it on such a regular basis that they learn to “wall off some of those feelings,” Little said, so they can proceed with their responsibilities. But Little said he still finds it emotional watching patients possibly interact with loved ones for the last time.

Little spends more time interacting with patients and colleagues (there are around 10 to 12 nurses in his unit) than he does his family during the week. On days he has to work, he arrives at Medstar around 7:30 a.m. and works until at least 8:30 p.m.

When he comes home — he and his wife Teresa live in nearby Accokeek–he immediately changes his clothes in his garage, puts his scrubs in a trash bag and showers to decontaminate himself. He also cleans the inside of his car.

He said anxiety seems to hit him more when he is at home and has more time to think about the situation. An innocent cough, which he could previously chalk up to pollen, now weighs on his mind because after continual exposure to coronavirus patients at the hospital, even while wearing PPE, he wonders if he contracted the virus.

During his time off he enjoys riding his bike, walking outside and baking. While at home he also tries to eat a proper diet of fruits and vegetables to ensure he’s as healthy as possible so he can provide the best care to his patients.

“It’s always a concern (when Little comes home) because I don’t know what to expect,” said Teresa, who is from Albemarle and first met Little when they were teenagers. “I’m just hoping that he’s keeping himself safe while he’s attending to individuals that need his care.”

She cooks dinner for him and makes sure he is as relaxed as possible while at home.

Teresa is also on the frontlines. She is a flight attendant with United Airlines and says though her schedule has been altered, she still averages about one flight a week. She said the flights now average between one to 15 passenger and both employees and passengers are required to wear masks.

Many of the flights have been designated solely for medical professional and first responders, which Teresa says is “a good feeling.”

Little gets bothered when he sees groups of people gathered close together without wearing masks. While he knows many people are ready to leave their house and get back to work, he’s not sure that’s a prudent decision, since cases might quickly spike. “Is it worth losing your life over?” he said.

Dealing with the stress of spending 12 hours a day fighting against an invisible enemy that is highly infectious and lethal is not easy for Little or any nurse or doctor. Though he still travels to nursing homes to assist residents infected with the virus, “I have to cut back to think about my own safety at some point,” he said.

And the safety of nurses and doctors on the frontlines is paramount. Thousands of healthcare workers have been infected and many have died. According to an April report from the Centers for Disease Control and Prevention, more than 9,000 healthcare workers in the country had contracted the virus.

“As a nurse you put a lot into trying to keep someone alive and support their family the best way you can,” Little said. “It’s a very hard job…When you’re on the job you got to give a lot of yourself. You can’t be selfish. It’s got to be about the patient.”

U.S. Army Maj. Terez Little is incredibly proud of her father and all the nurses who continue to risk their lives to help others.

“I believe it’s one of the highest and most noble acts of courage for them to continue to go in and continue to put themselves on the line in order to save others,” she said. 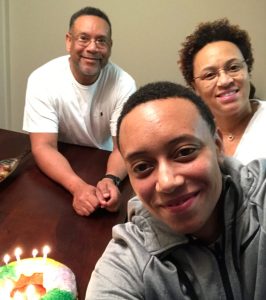