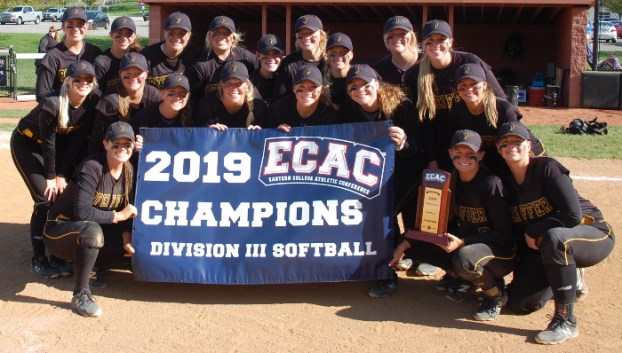 After advancing earlier in the day with a 5-3 win over Neumann, the third-seed Pfeiffer University claimed its second straight ECAC Softball Championship on Saturday afternoon with a 9-1 win over top seed and host Penn State Behrend.

Senior Kiana Millsaps earned the ECAC All-Tournament Team and Most Valuable Player honors, picking up the win in the circle for Pfeiffer (36-7). She allowed four hits in five innings and one run, and didn’t surrender a fly ball out in the tournament.

After three scoreless innings, Pfeiffer pushed eight runs across the plate in the top of the fourth to take the lead. Junior Makenzie Pennell opened with a single and advanced to second as as Millsaps reached first on an error. Both advanced on a wild pitch then sophomore Reece Davis singled up the middle that drove in Pennell from third. The throw home bounced away from the catcher allowed Millisaps to score and Davis to advance all the way to third.

With one out in the fourth, sophomore catcher Sara Brown singled to third that allowed Davis to score to make it, 3-0. Freshman Hannah Tyner was hit by a pitch to put runners on first and second. Freshman Maranda Benton then reached first on an error by the shortstop to load the bases. Senior Vada Blue Sherrill singled up the middle to push Brown and Tyner across the plate to make it, 5-0, as Benton took third on the play. Sherrill later stole second to put both runners in scoring position.

A wild pitch allowed Benton to score and Sherrill to take third to give the Falcons a 6-0 lead. With two outs, Pennell comes up for the second time in the inning and this time she belts a two-run home run over the left field wall to make it 8-0.

With one down in the bottom of the fourth, Penn State Behrend (28-12) senior A.J. Nichols doubled to the right center field gap and later moved to third on a single to left field by junior Alayna Derzak. Nichols scored as freshman Kylee Bundy reached first on a fielder’s choice to make it, 8-1.

The Falcons added another run on two hits in the top of the fifth to take a 9-1 lead. With one down, senior Kari Westerbeek singled to left center before being pinched run for by freshman Hallie Chisholm. Brown tallied her second hit of the game as she singled to center to put runners on first and second. With two on now for Tyner, she reached first on an error by the right fielder that allowed Chisholm to score from second before the inning came to a close on a fielder’s choice and a strikeout.

Lion’s pitcher Nichols took the loss in the circle as she six runs on four hits in 3.1 innings of work. She also went 1-for-2 at the plate with a double and a run scored. She also earned All-Tournament Team honors with teammate senior Carson Hauser.

The Gray Stone women’s soccer team has continued the team’s recent history of success with this year’s efforts under second-year... read more